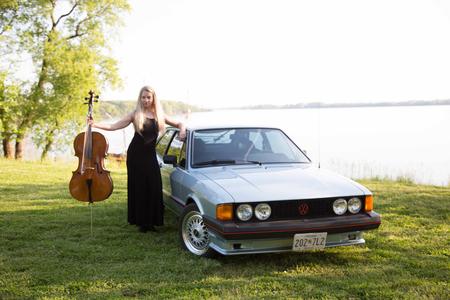 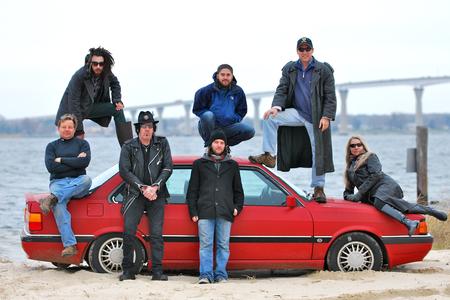 Clearbrook Project started with the place that brought all of us together.  This album was recorded, produced, and mastered on this small piece of the shore that we call home.

Seven people took part in the creation of this album. All of them made it their own. This photograph was taken on a cold December day on the car that is the property "golf cart".  We call it the General Lee.

Brian Page- (standing over the windshield)    Realtor, entrepreneur, car enthusiast, manufacturer, artist, songwriter, and musician.  The artwork can be seen at this web address;  www.silhouettemetals.com.  The manufactured car parts can be seen at www.mk1motorsports.com

Kristin Ostling- (sitting on the hood)Tenured Cellist for the Baltimore Symphony Orchestra. Her melodic input can be heard throughout this album.   When "Hold a Candle" was recorded, she laid seven tracks, back to back, and when we played them all back together they sounded like a seven member cello section.  Not a single change was made to them because they were so perfectly blended.

Chip Cropper- (sitting on the trunk)Business owner and entrepreneur, Chip wrote many, and performed some, of the solos that are on many of the first songs on the album.

Erik O'Dell- (standing in front of the rear door)Erik is the front man for the band known as Any Given Sin. In addition to helping create "Hold a Candle" and "Dictators Fall"  he wrote "Slowdown" in its entirety.

The following three members are members of the band currently known as Izem.  Their website can be found at  Izemmusic.com.  They recently introduced their first full length original album "Rorschach".

Justin Dawson(AKA Dusty Waters and "Keymaster")(standing on the trunk)- Justin not only played Bass on every song on the album, but also edited, produced and mastered the entire project.  He is the Bass player for the band Izem.

Cameron Gainer(squatting on the roof)- Drummer for Izem, Cameron played drums for the first song on the Album, "Days to Weeks"

Michael Damron-(standing in front of the front door) Front man for Izem, Mike played the drums for the song "Crackhead Fred"